PERU: Maternal Deaths Are Decreasing Except in Rural Areas 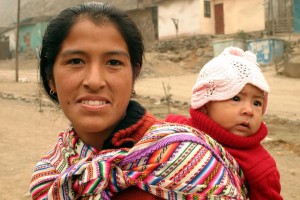 For over two decades, Peru has made advances in maternal health except in rural areas, where maternal death statistics remain unchanged.

A 2007 report from the Ministry of Health claims that the five main causes of maternal death in Peru are hemorrhage, pre-eclampsia, infection, complications following abortion, and obstructed birth (although scholars suspect that deaths from complications following abortion occur at a much higher rate than reported). Of all maternal deaths, 27 percent occurred during pregnancy, 26 percent during the birth itself and 46 percent during the first six weeks after giving birth. The report stated that Peruvian women die because they not only lack access to emergency obstetric care, but also to general information on maternal health and to health staff members who can speak indigenous languages ((Amnesty International, “Fatal Flaws: Barriers to Maternal Health in Peru,” (London 2009), pp. 14-18.)).

The disparities between richer and poorer sectors of Peruvian society, including indigenous communities, are especially apparent in terms of maternal mortality. Throughout Latin America, indigenous women are more likely to die from pregnancy-related complications regardless of overall improvements in maternal care. This holds true in Peru, where 23% of women are indigenous and maternal deaths are more concentrated in the rural areas where they live. For example, in Puno, where the majority of the population is indigenous, maternal mortality was 45% higher than the national average in 2011 ((Dan Collyns, “Indigenous women in Latin America remain invisible to society, warns UN,” The Guardian, 11 January 2013.)). Women in rural areas face transportation difficulties getting to distant health facilities, so they often give birth at home without a skilled birth attendant present. The 2007 national census of Indigenous Peoples showed that nearly 60 percent of the communities covered by the census did not have a health facility, and those that did were equipped to perform only the most basic first aid and health care ((Amnesty International, “Fatal Flaws: Barriers to Maternal Health in Peru,” (London 2009), p. 21.)).

The Peruvian government’s Plan to Reduce Maternal Mortality aims to broaden the coverage of prenatal check-ups and institutional care at childbirth. It includes policies like providing drugs for free care facilities in poor communities, training more health practitioners in emergency obstetric care and maternal health care (including the vertical birth method common among indigenous women), and training health professionals in indigenous languages. Additionally, it intends to increase the number of waiting houses, or rooms where expectant mothers who live far from health centers can stay ((Committee on the Elimination of Discrimination Against Women, Consideration of Reports Submitted by States Parties Under Article 18 of the Convention on the Elimination of All Forms of Discrimination Against Women, Fifth periodic reports of States parties: Peru, U.N. Doc. CEDAW/C/PER/5 (2001), p. 41.)) ((Stephanie Busari, “Peru has high maternal mortality rate, rights group says,” CNN, 9 July 2009.)). However, advocates complain that the government is not effectively implementing these measures. For example, while the number of waiting houses had increased more than threefold between 2001 and 2009, only half had been set up in rural areas, and 45 percent of health professionals claimed they had not received sufficient training on the vertical birth method ((Ibid.)).

Aside from government efforts, health workers and non-governmental organizations are attempting to improve maternal mortality in Peru. One example of success is the rural Santillana district of Ayacucho. Health workers there sought to understand why women were avoiding birthing at the local clinic and asked for input from the community. They discovered that, aside from the health workers not speaking the local language (Quechua), women and families disapproved of certain clinic policies that disregarded their traditions. For instance, workers barred husbands and other relatives from the delivery room, forced women to wear hospital gowns instead of their own clothes, had them birth lying on a table instead of squatting and discarded the placenta instead of giving it to the family to bury. Health Unlimited, a nonprofit organization, intervened and helped change maternal health services in the district, ensuring communication in Quechua, allowing relatives to stay and help, setting up delivery rooms so that women could squat, and making other changes according to local traditions. By 2007, 83 percent of births were taking place in the clinic as compared to a mere 6 percent in 1999 ((Denise Grady, “Pregnancy: Clinic in rural Peru draws more women by following local childbirth traditions,” The New York Times, 7 September 2009.)).