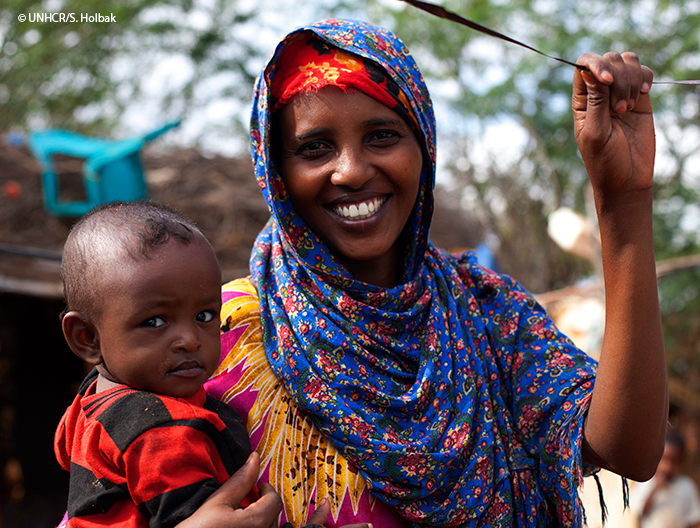 Photo courtesy of Australia for UNHCR

With a critically damaged health system for over two decades, maternal health in Somalia is in tatters, although recent changes bring reason for hope.

Since the collapse of the government in 1991, political upheaval, lawlessness, clan warfare and the threatening presence of Islamist insurgents have plagued Somalia. With over a dozen failed attempts to establish a government since then, Somalia is finally beginning to enjoy a measure of stability following the 2012 installation of an internationally-backed government–the first functioning government since the late 1980s. As the country begins its recovery from decades of insecurity and several devastating droughts and famines, Somalia’s critically damaged health system requires extensive attention12. Understandably, the current humanitarian crisis in Somalia is urgent. With approximately 1.1 million displaced people, many are living in makeshift camps where, like most of Somalia, health services are limited3.

In 2010, an estimated 1,000 maternal deaths occurred per 100,000 live births, making Somalia’s maternal mortality ratio one of the five highest in the world. The ratio has remained unchanged since the early 1990s, indicating that a Somali woman’s lifetime risk of maternal death has hovered at about 1 in 16 (using conservative estimates) for more than two decades now45. In 2013, the ratio dropped to 850 deaths per 100,000 live births, likely due to more stable governance and continued humanitarian efforts by international organizations6. However, the current situation remains dire, with one out of every 12 women dying due to pregnancy-related causes, and only 9 percent of births assisted by skilled attendants7.

Aside from its history of severe disasters and prolonged conflict, several other factors affect maternal health negatively in Somalia. According to 2012 data, 76 percent of the population lives in rural areas, where access to health and family planning services is extremely limited8. Many women are nomadic, so their access to skilled medical care is transitory9. Additionally, the modern contraceptive use rate is only about 1 percent and the total fertility rate is 6.6 children per woman1011. Short birth intervals can be dangerous for mothers—especially for those that are malnourished from drought and famine—and multiple pregnancies increase women’s risk for obstetric complications12. 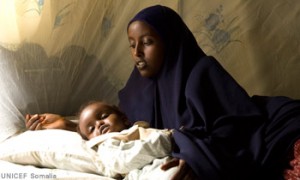 Moreover, Somalia has some of the world’s highest prevalence rates of child marriage and female genital cutting (FGC), both contributing largely to maternal mortality. Nearly half of all girls are married before their 18th birthday, and those younger than 15 are five times more likely to die in childbirth than women in their 20s13. Approximately 98 percent of Somali women have undergone FGC (80 percent having undergone the severest form of the procedure), and little has changed since the early 1990s when data first became available. Leaving only a small opening for passage of urine and menstrual fluid, FGC endangers a women’s health through recurrent infections, chronic pain, cysts, fatal bleeding and complications during childbirth1415. Although the problem is pervasive, the numbers are beginning to drop in the country’s more stable northern regions, thanks to awareness campaigns and an Article of the 2012 Constitution that bans the procedure1617.

Somalia’s population is over 10 million, and the number of basic emergency obstetric care facilities per 500,000 people is 0.8, compared with the international standard of 518. There are signs of improvement, however, and ongoing interventions provided by international organizations are helping support safe delivery. Maternity waiting homes, for example, provide a range of health services to expectant mothers and their babies. Built predominantly in displacement camps, they offer essential care to women at all stages of pregnancy. The homes provide rooms where women in their final month of pregnancy are invited to stay, enjoy free meals and ultimately deliver under the care of a skilled attendant or be transferred to the nearest hospital should complications arise. There were 34 such maternity waiting homes in Somalia as of 201319. Other reproductive health interventions include providing obstetric fistula repair services, advocacy efforts to end FGC and sexual violence, and HIV prevention and treatment services within mother and child health centers2021. Such projects, combined with more stable governance and new laws banning harmful practices, are sure to improve the maternal health situation in Somalia, but repairing and rebuilding will take time. However slowly the changes proceed, these improvements will eventually see an end to decades of instability, restoring hope for Somali mothers to safely deliver children and raise their families in security.